A large earthquake struck the island of Taiwan at approximately 1:45 a.m. (local time) on September 20, 1999. The quake killed or injured thousands of people, left thousands more homeless and caused extensive destruction to buildings, roads and utilities. Most of the casualties and damage occurred in the central Nantou, Taichung and Yunlin Counties. The quake triggered a series of landslides. 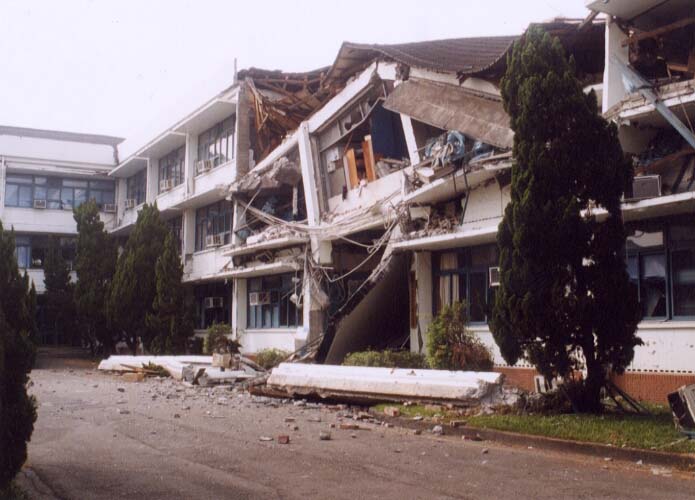 Afteshocks: Major aftershocks measuring as much as 6.8 and 6.3 on the Richter scale occurred the day after the major quake. More than 2,000 aftershocks were recorded in the days following the main shock.

The plate tectonic systems in the region near Taiwan where this earthquake occurred are extremely complex and have changed considerably throughout geologic time. The tectonic setting and the dynamics of interaction have been extensively discussed in the literature (see references below).

The island of Taiwan is located on the convergent boundary between the Eurasian and the Philippine Sea tectonic plates. Presently, and during the Plio-Pleistocene period, principal tectonic plate interaction in the vicinity of Taiwan, has been closely related to the Ryukyu and Luzon arc-trench systems, characterized by subduction, convergence and rotation, but marked primarily by the collision of the Luzon volcanic arc with the Asian continental margin.

Also, there has been apparent northward subduction of the Philippine Sea plate beneath the Ryukyu arc on the Eurasian plate along the Ryukyu Trench. The Ryukyu arc is to the east and northeast of Taiwan while the Luzon Arc System is south of Taiwan (see figure). Both volcanic arcs extend onto the island of Taiwan.

The tectonic interactions are extremely complex. In the vicinity of Taiwan, They both subduction and plate convergence take place but not along a simple plate boundary or subduction zone as it would be commonly conceived, and this is due to the difficulty of subducting a portion of the continental crust which is markedly buoyant. Apparently, a wide distributed shear system developed during different stages of the arc-continent collision.

Earlier tectonic plate convergence in the vicinity of Taiwan was marked by an apparent eastward subduction of the Eurasian plate underneath the Luzon arc on the Philippine Sea plate. However, this shear motion moved westward with time, forming a broader zone of deformation involving subduction, collision, and plate consumption, rather than a discrete well-defined plate boundary. On Taiwan, this wide belt of deformation extends for about 100 km from the western to the eastern offshore region of the island.

(U.S.G.S map of the earthquake's epicenter, other earthquake epicenters, and tectonic plate boundaries)

This active, complex and ever changing tectonic interaction and collisions along a wide deformation belt, have affected the entire island of Taiwan and have created in the past the Central Mountain Range, known as the Penglai orogeny and the Longitudinal Valley of eastern Taiwan, both areas of high seismicity.

The Central Range is characterized by fast uplift at a rate of 2-3 cm/yr or more and fast tilting at both lambs of the mountains, the west end tilting westward of about 1.0µ radian/yr while the east of about 3.0 µ radian/yr. Both regions are characterized by the widespread distribution of shallow-focus earthquakes. The earthquake of September 1999, had its epicenter in this zone of Central Taiwan - thus no tsunami was generated.

As already described, Taiwan is located on the convergent boundary between the Eurasian and the Philippine Sea tectonic plates, a region characterized by subduction, convergence, rotation, and collision of the Luzon volcanic arc with the Asian continental margin. BothThe Ryukyu arc is to the northeast, and the Luzon Arc System to the south, converge onto Taiwan.

Northward subduction of the Philippine Sea plate beneath the Ryukyu arc on the Eurasian plate along the Ryukyu Trench can generate, large potentially tsunamigenic earthquakes. According to old Japanese records, on April 24, 1771, a large earthquake (with an estimated Richter magnitude of 7.4) occurred near the southermost Ryuku Islands, just south of Ishigaki Island, an area controlled then by the Japanese Satsuma samurais.

A tremendous tsunami was generated according to old records. Claims of maximum runup of 50m to 85m have veen made. Tsunami devastated the islands of this group and the more distant islands of the Miyako group. Huge blocks of coral were carried by wave action. A large coral block was found 2.5 km inland. Claims were made that the block was not a remnant of erosion but that it was deposited by a tsunami wave. Records of the Satsuma samurais indicate that about 11,000 people were killed in the southern Ryukyu islands. The tsunami effects in Taiwan, Hong Kong and elsewhere in the region are not known.

Assessment of Tsunami Generation from Earthquakes in the Taiwan Strait

None of the earthquakes with epicenter on the island of Taiwan are not known to have generated tsunamis. However, earthquakes with epicenters near or in the sea can generate tsunamis along the coast of Taiwan and of mainland China. The most recent large earthquake (mb=6.5), in the Taiwan Strait occurred on 16 September 1994 in the western part of the Tainan basin, at a very shallow depth of 13 km. It was named Peng-Hu Earthquakesk. The quake's focal mechanism indicated a sea floor movement consistent with normal faulting, with its axis along a N-S direction.

The orientation of the crustal strain beneath the Taiwan Strait appears to be dominated by North-South extension rather than the East-West compression that is observed along eastern Taiwan. Given the complex tectonic interactions of the region, tsunami generation is possible. The tsunami risk for the Taiwan Strait requires careful evaluation and study.

Watch the latest videos on YouTube.com

Web Design by Dr. Carolyn Carayannis © Copyright 2008 / all rights reserved. © Copyright 1963-2007 George Pararas-Carayannis / all rights reserved / Information on this site is for viewing and personal information only - protected by copyright. Any unauthorized use or reproduction of material from this site without written permission is prohibited. Material included at the website links above is for informative and educational purposes and for disaster preparedness only. Any predictions of large earthquakes, destructive tsunamis, or any other natural disasters presented in these pages are based primarily on statistical determinations of the historical recurrence frequencies of such events. Such historical/statistical approaches are used only for long-term predictions. There is no intent by the author to predict or forecast any type of natural disaster or to frighten people.